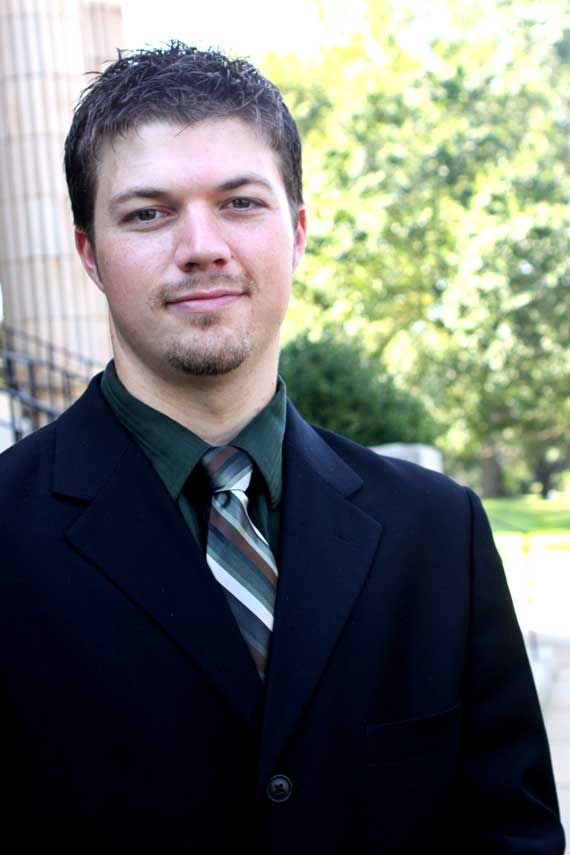 Michael is the Dayspring Trio’s Lead singer. He lives in Americus, GA with his wife Allie and son Logan where he works as a Regional Sales Manager for Arrow Exterminators.

A: Bass singers started it all.  I’ve always been amazed with bass singers. I grew up on a cappella music where the bass singer carried the rhythm for the group.  There were no drums or bass guitars to keep the song moving, so the responsibility fell to the bass singer.  I had a friend who felt about the same way and then he discovered the Oak Ridge Boys.  He showed me some of Richard Sterban’s low notes and I was blown away!  I’d never heard such clarity or richness in any of the bass singers I was used to, so I began listening to more Southern Gospel.  I soon realized that the amount of talent in the industry is incredible and I’ve been hooked every since.

A: I sang, of course, with the original Dayspring because I was thought it was fun and a pretty cool thing to do.  David joined a group in Jacksonville, FL called the New Gathering Quartet as the baritone singer and they soon had an opening for a lead singer.  David gave me a call and I joined them as well.  After a year or two, that group split and the bass singer reformed his family group, Once Forgiven.  I stayed on as his lead singer and sang with them for another year or two.  It’s been Dayspring Trio ever since!

A: I began leading singing in my home congregation at a relatively early age at our monthly song service.  As a teen, the regular leader would ask me to fill in during other worship services if he was going to be away or wasn’t feeling well.  I would also lead many of the devotional songs for the youth group when we had our weekly meetings.  The biggest advantage I have as a singer is to have grown up in a non-denominational church that doesn’t use instruments.  Singing a cappella, you learn to sing on-key because you don’t have any music to hide behind!

A: I have many great professionals that I admire such as Bill Shivers, Guy Penrod, Jonathon Wilburn, and many others.  However, on a personal level, Chad Johns has helped me more than anyone to become the singer that I am today.  Chad was the bass/manager of Once Forgiven in Avon Park, FL and he helped me learn how to sing.  I used to just rare back and let it fly, but he taught me to concentrate on the notes I was singing.  He helped me develop clearer tones and to pay attention to every note I was hitting.  It was really a big change from how I used to sing, but he really helped me become a better singer.

Q: Other than singing lead, what are your duties with the group?

A: I do what may fall under the heading of managerial duties, but the group has no single manager.  I work out a lot of the bookings, getting details about venues, set-up times, program lengths, etc.  I tend to be the mouth of the group, from confirming bookings to introducing the guys on stage and introducing a lot of the songs we sing.  It worked out that way because by the time we formed The Dayspring Trio, I had sung on a larger scale than either David or Jason, so I was much more comfortable speaking on stage and keeping things moving. I also work with Jason on the prost-production of our album projects.

Q: I understand you were reluctant to join the Dayspring Trio. What made you change your mind?

A: I left the Once Forgiven group in Florida just after Logan was born.  The drive down to Central Florida every weekend really took a lot out of me.  Since I’d just left a group because of Logan being born, I couldn’t justify joining another one.  However, I knew that The Dayspring Trio wouldn’t be as busy at first and I was confident that it wouldn’t be taking me too far away from home.  Once I sang a little with David and Jason, the old dynamics resurfaced and were even stronger than before.  Not just our blend, but our ability to agree on most everything makes the group all the stronger.  The way we work together is a product of having grown up singing and maturing together.  If any one of us three were replaced, the group would never be the same.