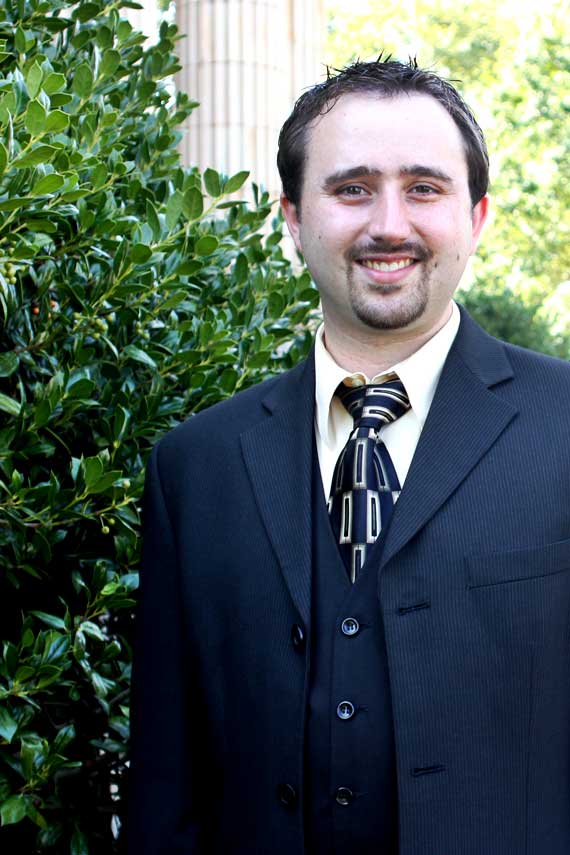 Jason provides the baritone vocals for the group. He lives in Chatsworth, GA with his wife Karen and their son Joseph where he teaches high school mathematics.

A: I’ve always been a fan of contemporary a cappella music. One of my favorite a cappella groups was a group called the Vocal Union. They sang many of the old southern gospel classics like “Wonderful Time Up There,” “Can He? Could He? Would He?”, and “Jesus Is Coming Soon.” It wasn’t long before I was listening to The Cathedrals sing these same songs. Shortly after that I heard that a few former members of the Vocal Union had formed a contemporary southern gospel quartet called Valor. With that I was hooked. I’ve been a southern gospel fan ever since.

A: I sang with the original Dayspring back in high school when we did all our songs a cappella. That’s about it. I sang in the Falkner University Chorus for one year and tried out for a few other southern gospel groups (the biggest one being The Stamps), but Dayspring is really all I know. To be honest, I wouldn’t have it any other way.

A: God has surrounded me with music from the time of my childhood. My family, as well as the church I grew up in, really cultivated my love for music. I can’t remember a single Christmas at my grandparents’ house when I wasn’t listening to my uncle Vic play beautiful improvised Christmas songs on the piano. I was blessed to grow up in a church that was small enough that once a month we had a “singing night.” The congregation requested songs out of the hymnal or devo song folders (this was before projector screens) and the song leader would take names of volunteers for leading songs. We would have kids as young as eight or so “leading” the congregation in familiar songs. Of course the regular song leader would jump in as soon as the first quivering note was heard so that the child would not be stranded by himself, but it was a great experience for me as a kid and as a teen.

A: I look up to several vocalists in the industry; Arthur Rice, Bill Shivers, and Daniel Riley to name a few. However, I’d have to say that the person that has had the biggest impact on me musically is Michael Luten. I sang bass with the old Dayspring, so when we regrouped as a trio, it was a whole new ball game for me. I had never sang baritone before and certainly no feature solos. I already knew how to harmonize, but Mike helped me learn how to develop a brighter tone and become more comfortable in my higher register.

Q: Other than singing baritone, what are your duties with the group?

A: I do a lot of the boring administrative stuff. I handle all the legal aspects of the group like licenses, royalties, and taxes. I also do all the graphic design for our albums, business cards, and flyers and I am in charge of the website. I work with Mike to do all the vocal recording and production. Besides that I just try to keep the brothers from killing each other.

Q: What led to your decision to join the Luten brothers in forming a group?

A: Well at first it wasn’t really my decision, it just kind of happened. We were asked to sing at a Valentine’s Day banquet at church back in 1999 and then we sang again at a youth rally later that same year. After that we just started getting calls from other local churches wanting us to sing at their events. I guess we were a novelty because of our age (I was the oldest at fifteen.) People were just surprised to see such young boys form a group and sing without any training or adult instruction. Eight years later when David called and asked me to rejoin, I didn’t give it a second thought.